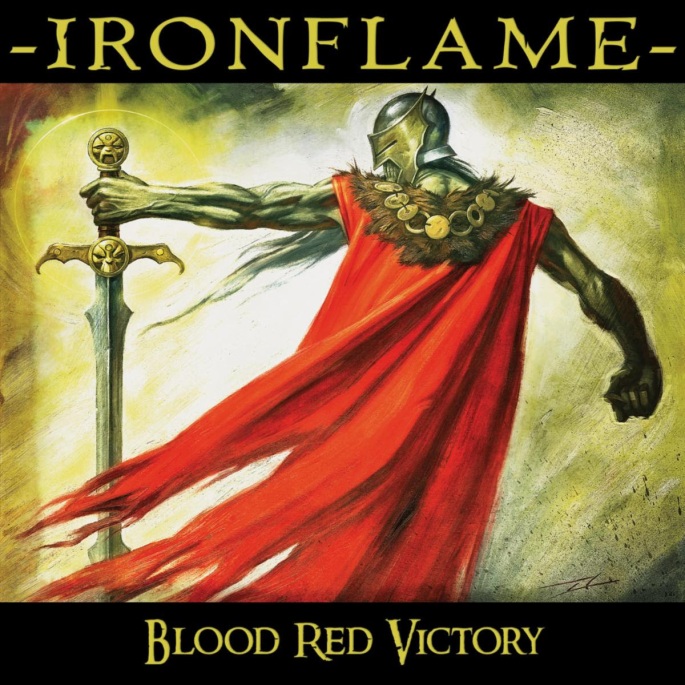 Ohio-based US heavy metal warriors Ironflame are soon to unleash their third album upon the metal world. Blood Red Victory is set to drop on 7 February under Divebomb Records. For a taste of what’s to come, check out the new single, ‘Seekers of the Blade’.

The studio version of Ironflame is done almost solely by multi-instrumentalist Andrew D’Cagna, but Blood Red Victory also features solos from Quinn Lukas and Jesse Scott, who are also part of the band’s live lineup.

D’Cagna on the album’s themes:
“There is a recurring theme of victory in the lyrics for this album. Some songs have an air of chest-out confidence; others are about overcoming adversaries or even adversity itself. Most have been written from a ‘we/us’ perspective, which makes the listener feel like, ‘We’re in this together.'”

Don’t miss this February release, because it’s sure to scratch that traditional heavy metal itch.

Springing forth with their third album are Pennsylvania’s heavy metal outfit Legendry. In The Wizard and the Tower Keep, they offer a unique heavy metal experience that’s drenched in late 70s/early 80s prog (think RUSH). Alongside this are other elements, too, such as speed metal (in ‘Behind the Summoner’s Seal’, for example), bands like Manowar, and classic thrash. While it doesn’t live up to the epicness it promises, the album is very different from what you’d hear from a metal band in 2019.

Contributing to this notable sound are the guitar solos, which are straight out of the 70s (and also the best part of the album). ‘Earthwarrior’ uses some funky guitar fx, and ‘The Lost Road’ has some sick classic shredding that’s worth pointing out. As far as the rhythm sections goes, everything is really laid back, and the mixing and easy vocals only pull on the music harder. This doesn’t make the music sound bad, but, for a band that want to call themselves “epic metal”, they’re basically shooting themselves in the foot.

Which leads us to the most crucial problem of The Wizard and the Tower Keep: its label. As I’ve said, Legendry refer to their style as “epic metal”, but this album, unfortunately, lacks the heroism that they’re so clearly trying to capture. Sure, epic metal can mean a thousand different things, with some heavy metal bands earning the title through all-out energy, or attitude, intense choruses, or through a beefy, powerful sound. However, this album lacks pretty much all of that and, while it’s not a bad album, it’s bad for what it’s intended to be.

On the other side of things, The Wizard and the Tower Keep excels in one aspect more than any other: sincerity. There’s no effort here to try to be something they’re not. They wrote an album, put their hearts into it, and, while it misses its mark, it’d be impossible not to appreciate this. There’s no bullshit here, no pandering or falsification. Just an honest heavy metal album with a lot of progressive nuances and long-ass songs.

I feel a bit of pride that Western Canada has produced a lot of excellent classic metal bands in the past decade. Bands like Riot City, Striker, and Traveler are just a few examples of the greatness I’m referring to. However, the best of all of them, in my opinion, is Vancouver’s own Iron Kingdom (and not because they’re so local to me – that’s just a bonus), and this is more evident than ever in their fourth album to date: On the Hunt.

Combining old school dual guitar sounds with clear, crisp vocals and some of the best drumming I’ve ever heard from a classic metal band, On the Hunt offers a bit more of a modern approach to the style of old. It’s the perfect balance, production-wise, because every part is clear and separated but there’s still an organic feel to the whole thing. There’s no lack of passion and sincerity, but there’s also just enough flare to keep me excited about it.

Now, comparing any classic metal band to Iron Maiden is a bit of a given, but one extra-Maideny thing worth mentioning about On the Hunt is how the solo sections are structured. I don’t think there’s a time where there’s rhythm guitar behind the solos, which prevents any potential messiness and allows the bass to actually come through with some super juicy lines.

But let’s take a minute to talk songs, because, holy fuck, there’re some heavy hitters here. One of my favourites has to be ‘Sign of the Gods’, in which we get some great drum solos, which seem to be a lost art these days. Actually, it was on this song that I became aware of some Neil Peart influence in drummer Joey Paul‘s style. On the side of the axes, ‘Road Warriors’ and ‘Keep it Steel’ have some noteworthy facemelters but, let’s be honest; every solo put forth by Megan Merrick and Chris Osterman is just sick. The title of most unique track, though, has to go to ‘Invaders’. It’s a bit darker than the rest and it’s more dynamic, too. The pulled back sections and builds are all done really well, and, of course, so are the solos.

Of the hundreds of heavy metal bands that have “Iron” in their name, not very many of them are deserving of it. Iron Maiden? Obviously. Iron Savior? Yup. Iron Fire? Definitely. Of course, Iron Kingdom are undoubtedly deserving of the mark, because the metal they’ve forged is strong, heavy, and true.

If you’re like me and can hardly wait for Crystal Viper’s new album on 22 November, you’re in luck, because they just released the first single of the album. It’s far more modern and melodic than their former work, but it’s still, in my humble opinion, a fucking banger.

For those of you who don’t know who Crystal Viper are, I’m happy to be the one to introduce you to them. Crystal Viper are a traditional heavy metal band (the finest, if you ask me) out of Poland. Led by the raspy, powerful vocals of Marta Gabriel, (who has a vocal range of four octaves, by the way), the band was founded in 2003 and has since released six albums.

Tales of Fire and Ice will be their seventh, and is set to be released on 22 November under AFM Records.

*Something else I think is worth mentioning is the fact that, due to their fans’ incessant bitching online, Crystal Viper withdrew their old album artwork and swapped it with the one above. Below is a picture of the original artwork, which, as you can immediately see, is quite different. I far prefer the mysterious, painted, unique art of the original to whatever generic gothic garbage that new picture is but, hey, what do I know?