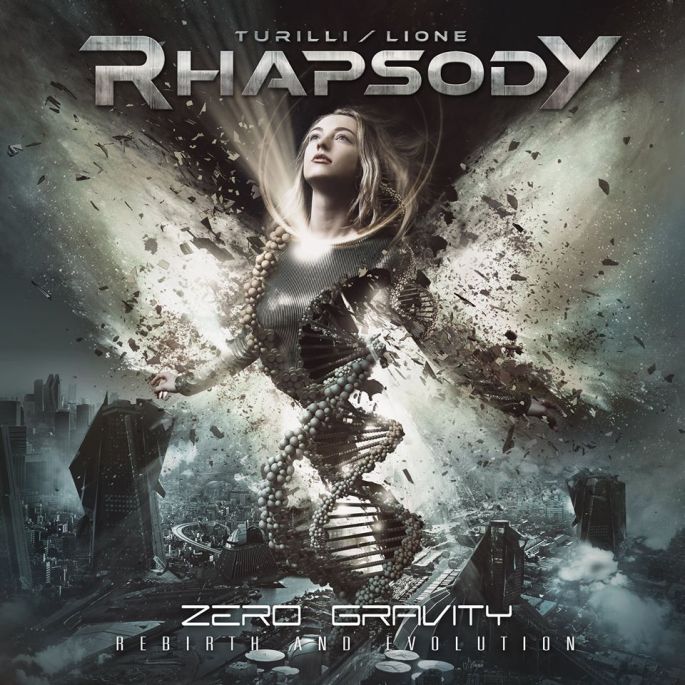 Well, it’s time again for another Rhapsody album. But not Rhapsody of Fire. Or Luca Turilli’s Rhapsody. Except, this one is also Luca Turilli‘s, except he dissolved his own Rhapsody and created a new Rhapsody with Fabio Lione, which is Turilli / Lione Rhapsody. Get it? Great. Now let’s move on.

Zero Gravity (Rebirth and Evolution) is the latest brainchild of the aforementioned multi-instrumentalist and composer, Luca Turilli. As such, it’s (as expected) full of cinematic orchestrations, destructive synth lines, huge riffs, and vibrant arrangements. Oh, and we can’t forget about those ridiculous, facemelting, virtuoso guitar solos. Along with Turilli’s magic fingers and Lione’s pipes, Zero Gravity also features other members of the Rhapsody universe: guitarist Dominique Leurqui, drummer Alex Holzwarth, and bassist Patrice Guers. These Rhapsody-ers, with all of their combined might, have created a monster of an album.

Like most of Turilli’s music from the past decade or so, there are no dragons to be found in this Rhapsody; the lyrics instead deal with artistic and universal exploration. As such, Zero Gravity is a much more modernized version of symphonic metal. It’s cleaner and more electronic but it also carries a more experimental air than the typical, fantastical whimsy that is found in, say, Rhapsody of Fire or Twilight Force.

Despite an entire album of excellence, I have a couple favourites to pick with Zero Gravity. One thing I absolutely love about this album are how well the time changes are executed. ‘Fast Radio Burst’ is one of the better examples of this, in which the chorus is in 5 and the first half of the solo section is in 15/8. Acting as a cohesive force, the flowing orchestrations and bouncing synth lines are mostly responsible for these transitions working so well. Another really nice touch is the vocal duet in ‘D.N.A.’, which features Elize Ryd of Amaranthe. Her style suits the fast-paced electronic onslaught of the song perfectly and her performance is excellent.

Unsurprisingly, Luca Turilli has produced yet another symphonic metal hit. From its beefy basslines to the climbing, ‘Bohemian Rhapsody’ (oh hey, look, another fucking Rhapsody) vocal lines of ‘I Am’, Zero Gravity‘s thousand intertwined parts will blow your mind out of this dimension.